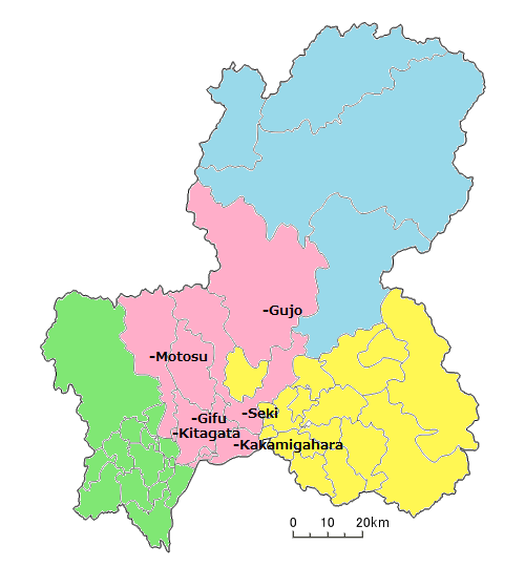 U-tan
​Located in the south-east of Gifu region, Gifu is the central hub for goings on in the region. So even if you are placed in a neighboring town, there is a high likelihood you will spend a fair amount of time in Gifu City.

Rarara
​Located in the south east of the Gifu region, Kakamigahara is famous for being the site of Japan’s oldest airfield and aviation matsuri, and for being one of the top 100 places to view cherry blossoms in Japan.
http://www.city.kakamigahara.lg.jp/

Momomaru
Located in the north west of the Gifu Region, this city was originally four separate towns, Motosu, Neo, Shinsei and Itonuki, but was incorporated together as Motosu City: ﻿http://www.city.motosu.lg.jp/﻿

Kitagataro-kun
Kitagata is the smallest municipality in Japan, at only 5 square kilometers, and is located in the west of the Gifu region, sandwiched between Gifu city, Motosu city and Mizuho city. It’s only 2km from the Motosu JETs and 6km from the Nishi-Gifu JETs.

Seki city is known for its sword making.  This tradition is 700 years old and Seki swords are still shipped all over Japan. In recent times, Seki swords crafts have turned to knives, cutlery, and other kitchen supplies as well.   Sword making demonstrations are frequently available.

The Gujo area is a combination of three smaller areas:

Hanachan and Takechan
​Located in the south west of the Gifu region, Hashima is the one city in the prefecture with a shinkansen stop. It’s also known for its newly opened Costco, its 300 year old wisteria tree, and the Takehana mastsuri held at the end of April.

Kakirin
Located in the western part of the Gifu region, Mizuho is famous as the origin of Fuyu Persimons in 1892. Around the end of September, many are grown, and you can buy them for quite cheap. The orange of the persimmons compliments the fall colors of the many ginkgo and maple trees, turning the town into a picturesque place during fall.

Negiccyo
Located in the south of the Gifu region, Ginan is famous for its own special version of a scallion. It has been designated as Gifu Prefecture’s traditional vegetable, and it is a mix between a long white and long green onion. Every year farmers from Ginan take the Tokuda long onions to the Onion Summit!

Kasamarukyodai
​Kasamatsu is located in the south of the Gifu region and runs along the Kiso river. Its mascots are the adorable two yuru-chara riding in boats on the right here!