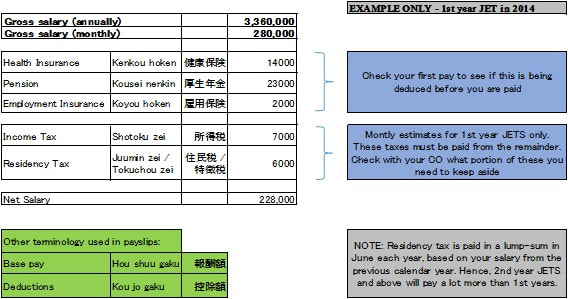 This is income tax directly deducted from your salary each month and paid to the central government. This will be handled entirely by your employer, but please check to make sure it is being deducted every month. It is worth noting that the amount of income tax may vary each month (sometimes quite considerably) as tax over certain periods is increased/decreased to account for under/over-payments in prior periods and miscalculations. Depending on your home country, you may be required to pay income tax in your home country.

This is the tax you pay to the governments of the Prefecture and Municipality you reside in. For example, a JET living in Gifu City will have their residency tax split between Gifu Prefecture and Gifu City. You should be aware of the following:

In certain circumstances ALTs from certain countries may be eligible for up to two years of tax exemption. Tax exemptions are not available to CIRs. In general, tax exemptions are available to ALTs from the following countries:
The United States
France
Ireland
​The Philippines
JETs are strongly advised to research and be aware of any tax requirements their home countries may impose upon them. JETs from the United States in particular may be subject to strict requirements for reporting tax. Such arrangements are their own responsibility. PAs, while they may be able to informally offer advice or resources in certain circumstances, cannot generally be expected to advise on the requirements of countries other than Japan.

​ As residents working in Japan, all JETs are obliged to pay contributions towards the Japanese National Pension scheme. This will be deducted by your Contracting Organization from your monthly salary. This might seem like a waste of money if you are not planning to retire in Japan, but you will be able to have refunded up to three years of pension contributions when you leave Japan. 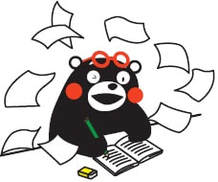 Thanks to Kumamoto JET there are comprehensive US Tax Guides to file for 1st year JETs and 2-5th year JETs.