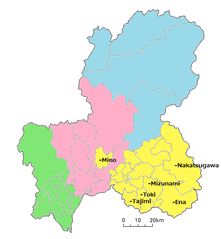 Tono is one of four regions in Gifu prefecture. The first kanji character in Tono (東) means east and the second is taken from an older name for the southern half of Gifu which was once called Mino (濃).

​Tono is located in the south eastern part of Gifu prefecture, bordering the neighboring prefectures of Nagano and Aichi.

Other towns/cities in the region include:
Note: In recent decades, many Japanese municipalities have merged, meaning that a number of smaller towns have become part of broader cities.