Owning a Car in Hida

Most ALTs in Hida buy a car, due to the general impracticality of public transportations in most areas. In winter, transportation by any other means is almost impossible and driving can be a struggle if you’ve never lived in a snowy area before — snow tires, an ice scraper, and a high-powered defroster are things you’ll want to be equipped with for the winter, and AC and a booming system will help get you through the summer.

The ALTs in Hida have a long-standing relationship with Shimamitsu Motors in Takayama (0577-32-057) for buying and servicing cars. They will work out payment plans for purchasing cars, servicing them, and paying shaken (vehicle inspection) around an ALT’s monetary situation – something very few businesses will do. There are no rental companies in the area willing to rent out to ALTs on a long-term basis, as we don’t have any standing relationship with those companies.

For navigation, most ALTs use Google Maps, as most local roads don’t have names. The major roads, however, do. Route 41 runs north-to-south, and intersects with other highways leading to Matsumoto and Fukui. The Tokai Hokuriku Expressway connects Hida to Japan’s convenient, but expensive, system of toll ways.

Getting Around by Bike

If you’ve been to Japan, you probably know how extensive and convenient the train lines are. However, you’re coming to Hida, so it’s probably best to throw out those notions. There is a single north-south train line in Hida, with express trains every 1.5 hours, and local trains about every 2.5 hours. Though infrequent, the trains are still a great way to travel, if you plan it out in advance. Here are some tips for riding the trains in Hida.

Planning Your Trip
The train schedule can be found by using public transportation websites such as http://www.hyperdia.com/en/ or if you have some ability reading and understanding Japanese, http://www.jorudan.co.jp/.

Many stations on the Takayama line are common Japanese town names, so if you look up a station and get an itinerary with 5 transfers, try putting “Hida” in front of the name to get the right one (i.e. “Hida Furukawa” rather than “Furukawa”).

Tickets
Aside from Takayama and Gero, just about every train station in Hida is unmanned and has no ticket-purchasing machine. There are also no automated ticket gates, so Suica, Pasmo, Icoca, & other type of metro passes can’t be used here. If you board a train at an unmanned station, you will need to buy your ticket from a train staff member (flag him/her down with a “sumimasen! (station name) made ikimasu.”) after you have boarded the train.

If you are boarding an express train (called the Wideview, literally ワイドビュー in Japanese) in Takayama or Gero, you need to purchase a ticket in advance. One popular option is the Morning Plan, which gives you a reserved seat on a morning train and an unreserved seat on any return train within 2 days. This option is recommended for Skills Development Conferences in Gifu, and is cheaper if you sign up with multiple people.

One-Man Local Trains
The majority of local trains in Hida are called “ワンマン” (wan-man [one man]), because the only person staffing the train is the conductor. If you are on a one-man train and getting off at a minor station (AKA not Takayama or Gero), you need to present your ticket and payment to the conductor at the front of the train before getting off.
A one-man train can be identified in several ways: Which Train Am I Taking?

Most highway and regional buses are operated by the Takayama Nohi Bus Center, sometimes abbreviated as “Takayama BC.” Nohi Bus’s highway routes are the cheapest way to get to Tokyo or Osaka and can get you there without any transfers. 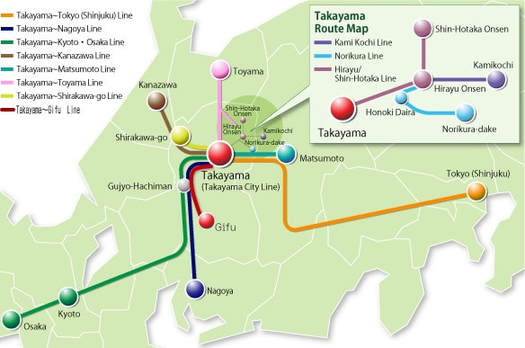 See http://www.nouhibus.co.jp/english/ for routes, departure times, and online reservations. Be aware that except during summer, there are no overnight buses.

Nohi Bus also offers local buses between Takayama and Gero, Furukawa, Kamioka, Kiyomi, Kamitakara (Miza), Shirakawa (Amotoge) and Shokawa several times per day. Schedules for the local buses can be found at Takayama Bus Center or any bus station along the route.